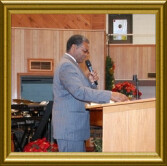 Pastor Michael Hardy joined Manna Christian Fellowship Church (MCF) with his wife Tamara in 1987 after relocating to Richmond from Northern Virginia. He is a native of Ford, Virginia in Dinwiddie county. Tamara is a native of Portsmouth, Virginia.

On August 14th, 2016, Pastor Hardy will have been married to his wife, Tamara, for 34 years. The Lord has blessed their union together and he has given them a son (Jordan) and a daughter (Michaela) who have both served in the Music Ministry.

Pastor Hardy met his wife at Virginia Commonwealth University in Richmond, Virginia where both received their Bachelor’s degrees.

Since joining MCF, Pastor Hardy has served the Lord and his people as Deacon, Elder and Senior Elder. In August 2014, he was ordained as Assistant Pastor.

Over the years, Pastor Hardy has served in various ministries such as the Doorkeepers ministry, Manna Men of Action ministry and the Agape ministry. In the past, he has also served as head of the Doorkeepers and Chairman of the Deacon board.

As Assistant Pastor, he is currently overseeing the MCF evangelistic ministries such as the Missions ministry, Senior Life Givers ministry and other outreach ministries. In addition, he also oversee the Manna Men Ministry, and assist as one of the facilitators for the classes taught in the spring and fall at Manna.

Over the years, Tamara has served as a teacher and nursery worker in the children’s ministry. She has also served in the following ministries: missions, intercessory prayer; music ministry.
Together Pastor Hardy and Tamara desire, first and foremost, to see their family and relatives accept Christ as their personal Savior. In addition, they desire to go and serve where the fields are ripe for harvest as the Holy Spirit leads.